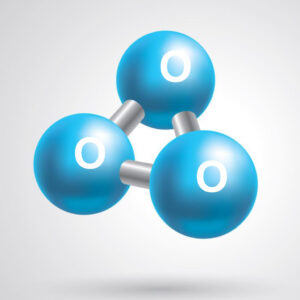 The word is derived from the Greek word óζειν (ozein), meaning “to smell.”

Ozone destroys odors and pollutants instead of masking them.

Unlike other deodorizing methods, ozone actually searches out and destroys problem gases. With three oxygen atoms in each molecule, rather than the two oxygen atoms in the air we breathe, ozone is unstable, so its extra oxygen atom can detach and grab onto odor polluting molecules to change their molecular composition. If the molecules are stinky ones, they can change to be non-smelly aka neutral.

Ozone gets rid of the smelly bits you can’t scrub away.

Ozone reacts with any contaminants in the air, water, fabrics, walls, and ceilings. And unlike other types of air purification systems, an ozone generator does not depend on the air passing through the machine to do its job.

Remove and clean any accessible odor sources and pollutants for optimal results.

2. Set the timer
An average 2 car garage will require 45 minutes of treatment time.

3. Leave the room
Make sure no pets or people are near the area to be treated.

4. Air out the room
Air-out the treated area for a minimum of 30 minutes before allowing people or pets to re-occupy the space.

English
× How can I help you?